Riots across the country are finally starting to slow and disappear now that liberal governors are accepting National Guard assistance under orders from Pres. Donald Trump.

The National Guard has systematically made taken care of many of these protests.

Here’s what we’ve learned so far about the National Guard’s squashing of recent riots and what it means for future protests.

Citizens Have the Power to Shape Riots 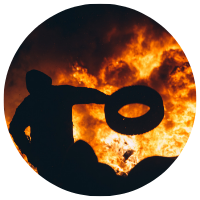 We do not recommend every American citizen go out onto the streets to take on protesters and rioters head-on.

But it’s clear that the National Guard did benefit from some American patriots that took it upon themselves to protect property and businesses, and to redirect BLM and other protesters into certain streets where the National Guard could round up the rowdiest rioters.

If you have some military training and the right protective armaments, protect your family first and foremost.

Remember that the National Guard will eventually come around to secure your area if you can stay put for a short while.

Many liberal state governors initially refused federal assistance and the backup of the National Guard, even as riots tore through some of their most populated cities.

But what the recent National Guard riot squashing has shown us is that those same governors will always eventually capitulate and ask for federal assistance.

The fact is that many riots are just too out of control to handle with police alone. The National Guard provides additional manpower and soldiers to enforce curfews and other precautionary measures that force riots to eventually die down.

So if you live in a liberal state, don’t lose hope – even if your governor seems stubborn now, he’ll eventually call for help and the president will give it.

Rioters Are Far from Powerful 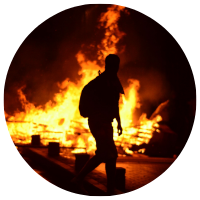 It can sometimes seem as though the rioters are the most powerful force in this politically charged time.

But the National Guard is far more effective and always ends up fixing things as soon as they show up on the scene.

It may take a few days, but the arrival of the National Guard is effectively the end of any protest wave, no matter how large and intimidating.

Police and the National Guard Always Win in the End

Arguably the most important thing to remember overall is that no matter how big riots get and how unstoppable the mob can sometimes seem, law and order are always eventually restored.

If a riot is taking over your town, rest assured that eventually Pres. Trump and the National Guard will arrive and set things right.

It’s just a matter of biding time, wrangling liberal state governors into obeying direct orders, and getting the necessary manpower into position.

The best thing you can do is wait out the storm and remember that help is always coming. Remember, LA and Detroit used to be cities wracked with the side effects of terrible riots. But even they have become much better places to live over time.

Thank you for reading, United We Stand